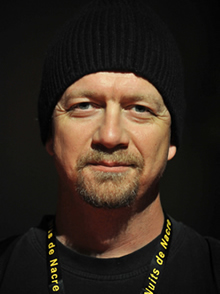 Music Director, guitarist and vocalist for the Johnny Clegg Band, Andy Innes releases his debut album, Anthems of a Stranger, drawing upon the talents of several bandmates and industry friends: Johnny Clegg (vocal / mouthbow), Derek De Beer (ex Savuka – drums), Jonathan Noyce (ex Jethro Tull / Gary Moore – Bass), Mandisa Dlanga (ex Savuka – Vocals) and a long, enviable list of some of the best session players and singers on the planet that this genre has to offer.

Anthems of a Stranger is a superb example of excellently recorded melodic World Folk-Rock with some masterful guitar instrumental offerings to top off the 14-song project. The songs were recorded principally by Robin Walsh at the legendary Undahaus studios in Johannesburg, South Africa and at several other international studios (in London, Brussels, Stellenbosch and Ottawa), mixed mainly by SAMA award winner Neal Snyman and mastered by Multiple Grammy award-winning engineer Gavin Lurssen (Robert Plant / Alison Krauss – Raising Sand; Guns ‘n Roses; Eric Clapton) in Hollywood. All the material was written and produced by Innes.

The powerful songwriting, dynamic performances and haunting orchestrations evoke uniquely southern African ideas in a crossover folk-rock context. This one will be staying on your playlist for a while!

Andy has worked as a session musician on various recordings in addition to the six albums he has recorded on for Johnny Clegg. He has also worked with Jackson Browne, Dave Stewart, Peter Gabriel, Ernest Ranglin, I Muvrini and several other international artists.

He splits his time between performance and production and has had his own recording label, Khangula Music, since 2008. Khangula formed a joint venture deal with Sony Music South Africa in 2010. Andy is also one of the producers who worked with Johnny Clegg on tracks for the 2011 HUMAN album.

Listen to the Songs

Anthems of a Stranger

Extracts from the album. Click the top-right arrow on the player to detach it from this page and listen while you surf.

×
Update Required To play the media you will need to either update your browser to a recent version or update your Flash plugin.

For Desiree, Alec, Juliet and Kerri

Before you rip this and pass it on, spare a thought for the costs that went into creating this for you. Instead of copying it for a friend, please consider keeping the music alive by sending them to buy it for a very reasonable price at:
www.andyinnes.com